I knew what conditions existed, what the limitations were, and still, I accepted the challenge. I hold myself responsible for the consequences.

My hats off to Yeng. I hope Tab or whoever is the coach (huwag lang si Chot) taps you as one of his assistant coaches.

Not to take away from.coach tim....

My hats off to Yeng. I hope Tab or whoever is the coach (huwag lang si Chot) taps you as one of his assistant coaches.


Coach Yeng was a man of his word. Because of his resignation, the naysayers of the program have stopped talking about the mistakes that were made or the players they felt didn't deserve to be included in the lineup. Guiao took full responsibility even if the burden was not his to bear alone.

Aside from helping put the Australia debacle behind, the most important contribution that Guiao made was an investment for the future. When the chips were down, instead of going to veteran players he was familiar with, he chose two PBA rookies who were largely unproven on the international stage. He invited Robert Bolick and CJ Perez into the pool and gave them the opportunity to shine.

When 2023 comes around and Bolick and Perez end up being vital cogs to the Philippine national team, may it be remembered that it was Guiao who gave them their first shot and that the losses they suffered together made the two hungrier for success.

Guiao planted roots and now he steps aside to give someone else the opportunity to grow the Gilas Pilipinas program and help it reach heights it has not seen before.

Guiao planted roots and now he steps aside to give someone else the opportunity to grow the Gilas Pilipinas program and help it reach heights it has not seen before.

In terms of heights in international basketball, it will be hard for Gilas to replicate what Caloy Loyzaga and company did in the 1954 FIBA-Worlds: win a bronze medal. No Asian or Oceania team has ever achieved that, let alone surpass it, since that time. Yeng is not cut out to coach in the international arena but he is a class act.

I hate to say this but the loss of USA to France was the fault of players from my team, Kemba Walker and Marcus Smart. Smart missed four free throws in the homestretch while Kemba missed two free throws that could have reduced the lead to three and all they needed was a defensive stop since there were 42 seconds left in order to have a last shot. The USA looked good but they choked under pressure. There was no ball movement in the final five minutes for the US and Kemba tried to will his team to win via daredevil drives, a couple of which were blocked by Rudy Gobert. This has been a disappointment for the US as it has been a disappointment to us.

With a third of the team coming from the Celtics, one may say this is their C Team

In my opinion, the US can win the gold with that line-up. However, Walker and Smart missed crucial free throws in the fourth quarter to seal their doom. The game against "Le Bleu" could have gone either way.

I pick france to win the gold ..

The US sent a team fit to do small ball with no dominant center needed.
They got exposed by dominant centers playing the Euro brand of bball fit in FIBA plays.
Gobert ate up the US and even Serbia's Jokic didn't even have to score to dominate them.

I nominate Norman Black as the next Gilas coach!

Yes, chief. Huwag na nilang pakialaman yung PBA coach na may team. I hope you don't get offended when I say that Chot can coach your alma mater. After all, he is your co-alumnus. 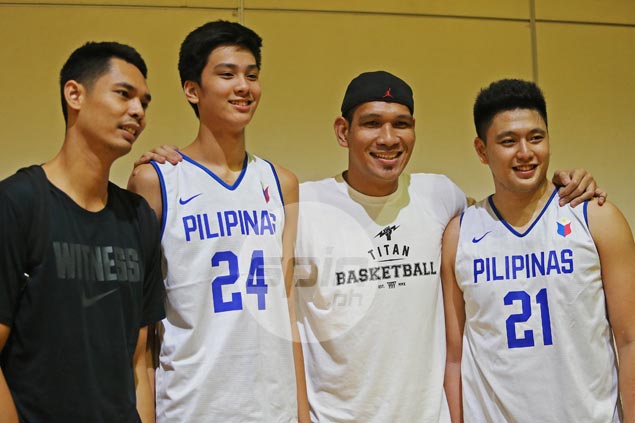 Who is the guy who is wearing 21? Kai Sotto is probably 7'4 as he is seen here towering over the Kraken.

Yes, chief. Huwag na nilang pakialaman yung PBA coach na may team. I hope you don't get offended when I say that Chot can coach your alma mater. After all, he is your co-alumnus.

chot? he can lead the ateneo blue babble battalion hahaha

Lame excuses from these superstars not to play for their country.

Chief, ok lang basta sa Gilas si Tab. Toroman was doing fine, umepal siya. Tab was doing fine, umepal na naman siya. Ok lang sana pag gold tayo sa FIBA-Asia in 2017 pero talunan tayo. We didn't even get a medal. We got embarrassingly routed by South Korea to the tune of 118-86 because he could not find a solution to the repetitive pick and roll that the Koreans were doing.